Different symbols used in flow-charting with their name and function. 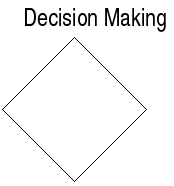